Battle of the bins; Printwaste considers the controversial topic of refuse collections 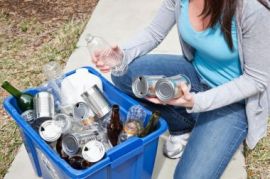 Analysis of official figures from the Department of the Environment, Food and Rural Affairs (DEFRA) show that in the past two years, nine of the ten Councils with the biggest improvements in recycling, pick up non-recyclable waste fortnightly; here’s what we think about the ‘battle of the bins’.

The UK is still way behind the EU for recycling and the current battle over weekly versus fortnightly collections is confusing the vital message of good recycling habits for domestic and business scheme adopters.

Managing Director Don Robins says, “In the UK, the target is to recycle 50% of all waste from households by 2020. The DEFRA report highlights the fact that in 2011-2012, 43% of household waste was recycled in England. It also confirms that the UK Government is leading by example having achieved their 2014-2015 Green Commitment targets by reducing their own levels of carbon emission, water usage and waste. This is commendable but by comparison with some members of the EU we are way behind. The potential for almost zero waste and the drive to recycle more has been proved possible by countries such as The Netherlands, Germany, Austria and Belgium. Whilst only broad comparisons can be made due to different types of waste management in all of these countries, the DEFRA report lists less than 5% municipal waste going to landfill in these countries.”

Looking at our European neighbours, the UK has the potential to improve recycling rates by a long way. Perhaps Eric Pickles is missing an opportunity; engaging the public positively regarding waste and recycling requires a straight forward message which is not confused by a general discussion on how often collections should be made. Collection schedules are a logistics issue and in this age need to be adaptable to suit the individual Council or business requirement. Achieving the recycling goals require education and publicity to engage the will of the public; the £250 million fund would have been better spent on education rather than confusing the message to the Councils by imploring them to go back to weekly collections.

We understand that there will naturally be densely populated areas of districts where weekly collections are required, but if we want to achieve 50% recycling rates, where individual family homes have the space for their own bins, then we need to provide 50% of the bin space for recycling materials. When provided, alternative weekly collections are being seen to work. In many areas the combination of these factors is contributing to the issue of overflowing general waste bins. The UK Government needs to follow its own example and having digested the DEFRA report, take another look at why they are advocating a return to weekly collections.