Geof Robins, our Operations Director has won an individual award at The Local Business Charity Awards; supported by Jelf Insuranc. Geof won after being nominated by two different local charities Cobalt and the Butterfly Garden. 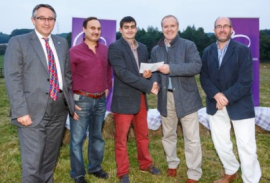 The final of the Local Business Charity Awards – supported by Jelf Insurance – took place on Thursday 4th September at Jack’s Field, Ullenwood, Cheltenham. The awards were created to recognise the efforts made by local Gloucestershire businesses to support local charities. There are only two categories in the awards, the corporate award and the individual award. The individual award, won by Geof Robins, was set up to go to an employee of a Gloucestershire business who has stood out from the crowd in their support for the company’s chosen charity; they are judged on their efforts, commitment and energy.

Driven by Geof Robins, Printwaste has been supporting The Butterfly Garden over the last two years. The charity is an educational, therapeutic and recreational scheme, based initially on gardening to help people of all ages dealing with disablement of any kind. Printwaste support the Butterfly Garden in Cheltenham by giving their students a purpose; allowing them to give something back to society and their local area through their recycling efforts.

Printwaste is also involved in recycling video tapes with employees of the garden helping to add recycling value to these materials.

We have also actively been supporting local medical charity Cobalt since 2009. Cobalt is a leading medical charity founded in 1964, helping in disease prevention, research, treatment and diagnosis. Cobalt has been making a real difference to the quality of life and the outcomes for those affected by cancer and other life-limiting conditions. As well as helping with the Cobalt’s charitable Christmas card recycling initiative, Printwaste also do weekly recycling collections for them.

Geof said “The fact that I was nominated for this award was an honour in itself, so to win is absolutely fantastic! The work we do with both Cobalt and the Butterfly Garden is something we at Printwaste are very passionate about. It’s fantastic that we can make a difference and I know we will continue to work for these charities and support them in any way we can.”