Celebrating our 35th birthday this month, what better time to take a look back at the journey we’ve been on to get here. To do so, we need to head back to 1983, where it all began. But, as Dorothy, Thelma and Frodo will tell you, a journey is never fun alone. So will you do the honour of joining us? If so, buckle up and get comfy, the ride is about to begin… 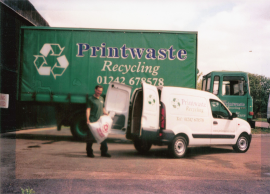 – In the very early days of the green revolution, brothers, Don and Geof Robins, saw an opportunity to start recycling paper waste from local printers in Gloucester. To give you an idea of what this looked like at the time, think two men and a van, plus a baling machine that looked like an antiquated cider press.

– Things had moved on a little (thankfully!). The Robins brothers were now collecting paper and cardboard from commercial businesses, as well as local printers.

– To help them out, Don and Geof employed six people – three of which still work for Printwaste today.

– Printwaste became a limited company and, to celebrate, moved to larger premises. But, this didn’t stay home for long, as two years later, they upped sticks again and moved to a premises double the size (Unit 6 at Stoke Orchard).

– Good job, as soon after, Printwaste set up their secure shredding service – a response to the introduction of the Data Protection Act 1998. They also added polythene to their recycling repertoire.

– Things ramped up pretty quickly. Not only had Printwaste achieved ISO 9001 accreditation, but advanced shredders were now shredding at a rate of 1.5 tonnes per hour, the vehicle fleet was collecting larger volumes of material than ever, across a 75 mile radius, and multiple new recycling waste streams had been introduced.

– Unsurprisingly, staff numbers increased to 30, and premises doubled – both in size at the Stoke Orchard site, and with the purchase of a new site, specifically designed to be a high security data destruction facility with double shred technology.

– All of this hard work led to Printwaste winning ‘Family Business of the Year’ at 2008’s Gloucestershire Business Awards.

– Hold on tight as the twists and turns are far from over. So far, the teen years have seen Printwaste achieve ISO 14001 and Safe Contractor accreditation, Managing Director, Don Robins, become Chairman of the British Security Industry Association, and many new and important services introduced.

– These include Waste-to-Energy and the UK-wide collection of carton waste for ACE UK. New services have meant a need for new vehicles and equipment too, so the company has expanded its fleet, with the addition of specialist suction vehicles, articulated lorries with walking floor trailers, and 5 mobile shredding vehicles.

– These new additions (plus a lot of hard work) have paid off, as Printwaste now serves over 3500 customers across 4500 sites, and employs 70 staff, including 9 members of the Robins family.

– Not ready to settle at that, Printwaste has just launched its latest product, Hop & Squeak – an eco-friendly alternative to standard animal bedding.

So it’s been a whirlwind, but an exciting one, and we’re so glad you’ve all been there to enjoy the ride with us. Now, let’s go check out the post-ride photos!