Gloucestershire based Printwaste the recycling, waste management and shredding business has won a new national award at a major industry set of awards. Printwaste won The Environmental Award and was one of six member companies of the British Security Industry Association (BSIA) to be recognised for their commitment to promoting the worldwide reputation of the industry. 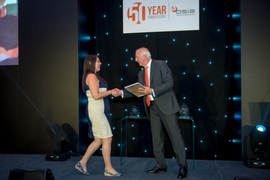 The brand new awards were presented at the BSIA’s Annual Luncheon at the Grand Connaught Rooms in London. Presented in three main categories – the awards invited contributions from all sections of BSIA membership, with one special commendation and one overall winner being announced in each category.

“The nominations we received this year were a testament to the fantastic reputation of our member companies and we look forward to the ongoing success of these awards,”  comments James Kelly, Chief Executive of the BSIA. “We felt it was important to ensure that the success of entire companies were also rewarded”

The Environmental Award recognises the commitment of a security company or its employees to improve sustainability within the organisation or to improve the wider environment in their local community.

Printwaste Recycling & Shredding received the accolade for the installation of 384 solar panels on their roof in order to move away from fossil fuels to cleaner energy sources. As well as installing the solar panels, the firm also fitted light sensors in corridors, toilets and to external lighting in order to reduce the amount of electricity being used. Printwaste continued to show a commitment to energy conservation by closely monitoring usage against material processed in order to assess ways in which electricity consumption could be reduced, whilst increasing output.

By transforming the unused roof space into an environmental asset, the electricity bill has been reduced by 51% with the annual C02 emissions decreasing dramatically. The commitment to the environment has also resulted in employees being more energy conscious, as well as their customers being happy in the knowledge that their materials are being shredded through eco-friendly solar energy.

Don Robins, Managing Director of Printwaste Recycling & Shredding, enthused: “Winning this award is fantastic recognition for the business and our staff at our security shredding facility in Cheltenham. We all know that in this day and age it is increasingly important that data and media products must be securely destroyed. It bolsters our green credentials and gives even greater re-assurance to our clients to know that the electricity used in shredding their data and confidential papers is generated by solar panels on the Printwaste building roof.”

Printwaste is no stranger to winning awards, it has picked up an impressive number of awards over the last few years. These include:

Awards for Excellence in Recycling and Waste Management – finalist – 2014