Did you know cans go to the gym as well? Follow Tim and Ally Can’s weight loss story here. 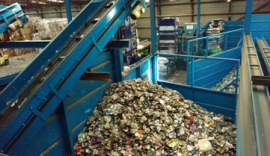 Hello everybody, we’re Ally and Tim Can, nice to meet you all and a Happy New Year to you too! We’re here to tell you about a story that many can relate to at this time of year – the grafting exercise of losing that post-Christmas bulge.

Truth be told, myself and my other half have done what we can’t help but do every year – over-indulge over the festive season. One too many platefuls of Christmas dinner, mince pies and glasses of mulled wine…let’s not even get started on the cheese. We’ve definitely piled on the pounds and it’s time to do something about it!

So, being January, Tim and I have set ourselves a joint New Year’s resolution of getting our ‘six-packs’ bulging once again. But where do we go to achieve this? We asked some of our friends, who recommended Printwaste, a company well-renowned for handling metal cans just like us at their state-of-the-art facility in Cheltenham.

Upon arrival, we started with a consultation and first session with personal trainer, Geof. First, he put us on the weigh bridge (more commonly known as scales). Then, he put us through our paces with an exhausting regime. Twenty minutes on what they like to call ‘the conveyor belt’ (or a running machine to you), and an abundance of weight machines (the baler) later, and both Tim and I were shattered. We’d been shredded to pieces, pummelled and pressed – boy, could we tell a portion of our festive weight had already been flattened!

After such a rigorous workout, it was time for a well-earned break in the sauna, so Tim and I went our separate ways.These weren’t your average saunas though. Located at the reprocessing plant, these saunas reach temperatures of 750 degrees, ensuring all toxins and impurities are removed from the body. The experience was much like sitting in a furnace; we were melting, literally! After enduring the heat, myself and Tim both took much-needed showers to cool off and get back down to room temperature.

There’s nothing worse than that morning-after-exercise feeling, gingerly waddling around like a penguin, barely able to move. Tim and I weren’t having any of that. Instead, the next day, we booked ourselves separate sessions at Mills’ massage spa, who work in conjunction with Printwaste. Speaking with the receptionist, we were advised to have a treatment called ‘rolling’, which involves stretching the body into very thin sheets to iron out all of those tight knots. Tim always hated the idea of massages (he thought they were too feminine!), but he knew they were vital to attaining greater flexibility and strength after his exhaustive workout.

In as little as six weeks, both Tim and I are pleased to report that we have shredded off our post-Christmas waistlines. It’s been a gruelling process, but we can’t wait to get ourselves down to our favourite nightclub, Shelf (just off ‘Supermarket Avenue’) to show off our new bodies on the dance floor. In fact, today, I’ve even managed to drag Tim along with me on a ‘January sales inspired’ shopping trip (girls, you know how hard that can be to do!) before we head out tonight to celebrate our transformation with our other newly recycled friends. We can’t thank Printwaste enough for helping us to re-shape our bodies and make us feel rejuvenated once again. We might have lost pounds, but we’ve gained a whole new lease for life!