Two factors that can help boost your company’s recycling rate

Posted on: 3 years ago
Bins and Storage ContainersBusiness Recycling

Despite an increased awareness about recycling and a definite shift in attitude towards it, many UK businesses still don’t know what they should be putting into which bin. Because of this, recycling bins often end up being a mish mash of recyclable and non-recyclable waste. And this can ultimately cause problems with how that waste is disposed of. 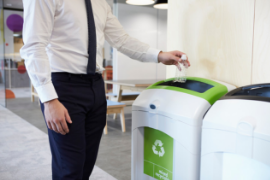 Therefore, despite good intentions, as a country, we’re still not getting as much value as we should be from our waste. So, we want to talk segregation and contamination – two of the key factors making a difference to whether something recyclable actually gets recycled.

Here, in the UK, we’re able to recycle all sorts of things, from plastics to paper, glass to electronics, and much more besides. And this is great. But, in order to get the most out of these recyclable materials, it is essential everyone learns to segregate them properly. Which is basically another way of saying, we all need to separate our waste out, in line with disposal guidelines.

If people don’t do this, those recyclable materials don’t get recycled, causing all sorts of damage to the planet – think Blue Planet! Post-collection segregation (at a recycling facility) will also take longer, and the whole process may end up being costlier to you as the customer.

In contrast, if everyone separates their waste out prior to collection, it’s easier to recycle, and on its way to a new life as something far from landfill.Segregation also helps to avoid contamination issues, something we talk about below…

Waste contamination happens in two ways – one, when the wrong items are put into the wrong bins (poor segregation), and two, when the right items are prepared in the wrong way (think leftover food residue on a plastic container).

Contamination is problematic, because it affects the sorting process and impacts on a material’s recyclability. Take a pizza box, for example. These are made from corrugated cardboard, a widely recycled material. However, once covered in cheese and grease, the pizza box becomes contaminated and completely unrecyclable. This is because, during pulping, the paper fibres won’t be able to separate from the oil. And pizza boxes are just the tip of the iceberg. A few contaminated bins can ruin an entire truckload of recyclables. Believe us, we’ve seen it happen.

So what can we do to help?

At Printwaste, we’re passionate about recycling everything we possibly can. So it’s sad to see an otherwise recyclable material become non-recyclable because it’s been contaminated in some way. To prevent this happening, we’re committed to working alongside you, our customers, to ensure your waste is dealt within the most sustainabile and environmentally-friendly manner. We do this in many ways, including:

But we can’t do any of the above without you. So, we have one favour to ask – go and check your recycling bins and see for yourself what’s going on. Are the wrong materials in the wrong bins? And does anything look contaminated? Have a look and we’ll be waiting at the end of the phone if you’d like a helping hand to make some changes.

Previous Post
An inside view into our Operations department
Next Post
How many of these documents do you shred?