5 types of packaging that are a nightmare to recycle

With Easter come and gone for another year, we’re still suffering from a serious case of the chocolate bloat. But that isn’t all that’s leftover from the long weekend. When opening Easter eggs, packaging just feels like an obstacle in the way of eating. It’s not exactly something one thinks about when they’ve got a whole piece of oval chocolate to demolish. 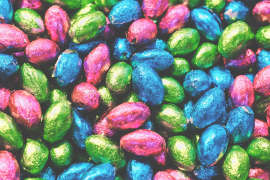 Yet, according to Which?, that very packaging accounts for up to a third of the weight of an Easter egg. Pretty excessive, right? Luckily, most of this cardboard and plastic is now recyclable, but it got us thinking about all the packaging still out there that isn’t. With this in mind, we’ve rounded up five of the worst offenders below…

Don’t be fooled by their appearance – crisp packets may look like they’re made of foil, but this isn’t the case. They’re actually made from a metallised plastic, which isn’t at all recyclable. If unsure, try the scrunch test – you’ll find crisp packets spring back every time (if they were foil, they’d remain scrunched). Considering, as a nation, we get through approximately 6 billion packets a year, that’s a whole lot of waste going straight to landfill. And, to make things worse, crisp packets have been found still intact after 33 years.

Yep, we’re referring to those triangular boxes that house your beloved BLT or tuna mayo sarnie. To keep the contents fresh, these boxes are made from plastic-coated cardboard, which, on the face of it, looks recyclable – it’s just plastic and cardboard right? Not so simple. It’s difficult for both consumers and processors to separate the cardboard from the clear plastic window, making it tricky to recycle. Waitrose has recently vouched to give their sandwich boxes a peelable tab, to aid separation, so fingers crossed change is coming.

Wrapping paper sure does look pretty, and always helps with the element of surprise when gift-giving. However, it’s a bit of a minefield to recycle. Sometimes, the wrapping paper is so thin, it contains few good quality fibres. Other times, it’s dyed, laminated or contains non-paper additives (e.g. glitter or gold and silver shapes). And, then there’s the sticky tape, ribbons and bows to contend with. All of which make wrapping paper challenging to recycle. Opt for simple paper wrap instead, and, again, use the scrunch test to check which bin your wrapping paper needs to go into.

Without naming names, some sports drinks and milkshake brands wrap their bottles in a glossy, printed sleeve. From an advertising perspective, this helps their brand to stand out on the supermarket shelf. However, it also renders the bottle impossible to recycle properly. This is because the sleeve is made of a thinner plastic, called polymer film, which is difficult to separate from the bottle, and confuses scanning machines at waste centres.

Most UK supermarkets use black plastic food trays for ready meals, as well as some meat, fruit and veg. And many of us are taking the time to clean these out and put them into our recycling bins. Little do most people know, these trays are actually non-recyclable. This is due to the carbon black pigment in the plastic, which is invisible to the infra-red sorting machines at recycling plants. So, where do they end up? You guessed it, landfill. With most of the supermarkets now vowing to cut down on their plastic usage, hopefully these black food trays will soon be a thing of the past. But, for now, pop them in your general waste.

And, if you’ve got any questions about what you can or can’t recycle, just get in touch with us and we’ll be happy to advise you.

Previous Post
Securing your Data Destruction: Are You GDPR Ready?
Next Post
How a community effort can make a difference with cardboard recycling