What do triangles and waste have in common?

From Don Robins’ favourite chocolate (Toblerone) to the Pyramids of Giza, there are some pretty well-known triangles out there. But, for this month’s Education section, we wanted to talk about one that is ever so slightly shrouded in mystery. 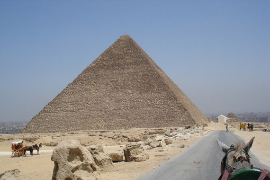 No, we’re not referring to the Bermuda Triangle (although we’re sure there is much that could be written about that!), we’re talking about the waste hierarchy. Despite its origins dating back to 1975, and its pyramid-shaped diagram being an incredibly useful tool for managing waste, most people haven’t heard of this hierarchy. So, we’re on a mission to change that – starting with what it is…

What is the waste hierarchy?

The waste hierarchy basically ranks the different options for your waste, according to what is best for the environment. These rankings are based on up-to-date scientific research about climate change, air and water quality, and resource depletion. And this is what it looks like…

As you’ll see, the hierarchy has five stages – Prevention (Reduce), Re-use, Recycle, Other Recovery (Energy) and Disposal (Landfill). But let’s break each of those down a little further…

Sitting pretty at the top of the triangle, prevention is all about reducing how much waste we generate in the first place. To put it simply, the less waste we produce, the less that needs disposing of. So, this means only buying what you need, opting for eco-friendly items, and being savvy with what you already have. For example, choosing non-packaged fruit and veg in the supermarket (avoiding plastic waste), and printing double-sided (reducing paper waste).

Next down, re-use is all about tapping into your inner creativity and finding ways to use what you already have, rather than buying new. Instead of chucking something away, you might clean, repair or refurbish it, so that it can be reused. Just think of all those refurbed phones, laptops and cars out there that, after a little TLC, had a lot of life left in them. Other examples include the whole concept of a bag for life, turning old pallets into trendy coffee tables, and making a noticeboard out of wine corks.

If you can’t prevent waste in the first place, and you can’t find a way to reuse it, the next step is to recycle – the third stage of the hierarchy. Recycling breaks down and processes used materials (waste) into new products. Doing so means we use up less of our raw materials, and less energy in production – great for helping against pollution. Recycling also, importantly, avoids landfill and its negative effects on the environment. Examples of recycling include turning plastic bottles into clothing, newspapers into egg cartons, and teabag paper into animal bedding.

If none of the above are possible, your next option is to go for energy recovery. This is the process of burning any waste that isn’t suitable for the three Rs (reduce, re-use, recycle), generating electricity and heat in the process. We refer to this as waste-to-energy. It is a cost-effective, hygienic and environmentally-friendly way of dealing with general waste. Even the gases generated in the process are diluted into steam to avoid any pollution.

Disposal is the last stage of the waste hierarchy, and basically refers to landfill sites – dumping grounds for waste. These sites do nothing but damage to the environment, emitting toxic gases, polluting soil, water and air, and impacting on people’s health. This is why, for us, the last stage of the hierarchy isn’t an option. We work hard to send zero waste to landfill and to ensure all of our customers can say they do the same.

So, that’s the waste hierarchy in a nutshell. Here at Printwaste, we use the hierarchy to help us decide the best disposal routes for your waste. When working together, we’ll help you to put the hierarchy into practice, so you can produce less waste, and gain value from the waste you do produce. And if you’re not landfill-free yet, we’ll get you there as well. If this is something you’re interested in, just give us a call on 01242 588600 or email us at sales@printwaste.co.uk and we can chat through the options.

In the meantime, we’ll go hunt out the Toblerone…